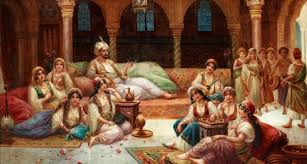 Arabic literature at the time of jâhiliyya

The Arabs call this period “Jâhiliyya” -Ignorance- because it ignored the existence of a single god as well as the monotheistic religion which was going to impose itself definitively thereafter. Indeed, the Arab tribes of the time were polytheists and worshiped in particular a God which they already called Allâh, represented in the form of statues. The Arabs even worshiped goddesses including the famous al-Lât, al-‘Uzza and Manât, cited and castigated by the Koran.

At that time, culture in Arabia was mainly oral. The written word, with a very rudimentary graphic support, could not serve as a vehicle for a culture already deeply rooted, with its codes, its requirements. The “literary” production was in fact limited essentially to poetry, orally declaimed wherever life manifested itself: market, battlefields, convivial evenings, oratorical jousts between rival poets …

This practice of poetry, original, omnipresent, must certainly represent a kind of social “cement”, a space of expression which far exceeded the simple pleasure of rhyming and finding pretty words or expressions. A bit like the media today! You could express your personal moods there, as well as settle accounts with enemies, make allegiance to this or that powerful of the moment or declare your love – publicly – to the beloved.

Unfortunately, of this intellectual effervescence, there were hardly any written traces dating from the time. It was in the last decades of the end of the 6th century that a true written literary tradition began to develop. The first writings will be compiled two centuries later in a large collection of poems: the Mu’allaqât. This synthesis work gives only a partial vision of what could be the literature of the time. It is likely that only the poems or parts of poems judged to be the best have been preserved.

The Mu’allaqât, are therefore a set of pre-Islamic poems. Their number varies according to the authors: from six to ten, seven being the most frequent. This name means “The suspended” because these odes would have been suspended from the Ka’ba in Mecca in the form of golden scrolls, a bit like the famous dazibaos of the Maoist era or the advertising posters of today!

These works were written during a time when Byzantines and Sassanian Persians fought for influence over the Arabian Peninsula, via their respective vassals, the Ghassanids and the Lakhmids. They were brought together for the first time by Hammad Ar-Rawiya and contain the themes dear to pre-Islamic Arabic poetry:
* description of the environment,
* praise of the protectors, of the dead or of the poet himself,
* the insults of enemy clans,
* love,
* wine.

Each text contains, in an often not very logical order, metaphors, comparisons, images, references to life in the desert. The poets in this collection are from different places on the peninsula, but the whole is written in the language of the Hedjaz region.